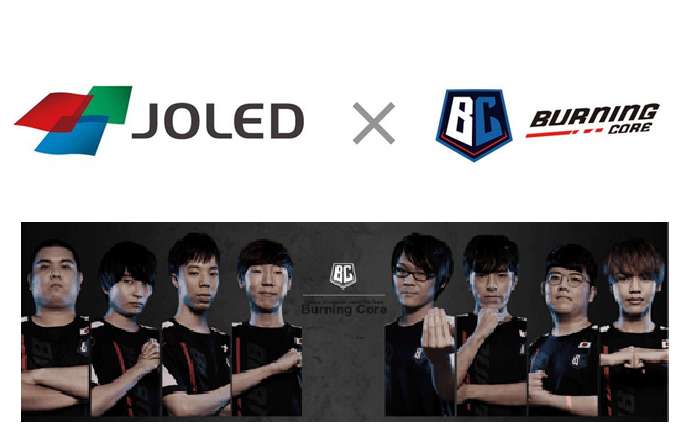 JOLED Inc. (headquartered in Chiyoda-ku, Tokyo; Representative Director & President: Tadashi Ishibashi), which develops, manufactures, and sells organic light-emitting diode (OLED) displays, has concluded a partnership agreement with the professional esports team Burning Core. By joining with Burning Core, JOLED aims to contribute to the progress of esports through pursuit of visual expression to communicate the worldview of esports in even more enriching ways.

Esports, which stands for “electronic sports,” refers to sports competitions using computer games and video games. The size of the esports market in 2018 is said to have grown to USD900 million, with a fan base of 380 million people. *1 As esports attracts increasing attention in Japan as well, the Japan League of “League of Legends”, said to be the most famous game in the esports market, was established in 2016. Burning Core, a professional gaming team competing in Summer Split 2018 of the “League of Legends Japan League (LJL)”, shows great promise for the future.

JOLED has long considered esports to be an application that promises to demonstrate the advantages of OLED displays; a self-illuminating devices that deliver superb picture quality with high contrast, high color reproducibility, and a fast response rate. Using its proprietary RGB printing technology, JOLED manufactures medium-sized OLED displays that had been considered a difficult challenge to produce using conventional vapor deposition techniques. It ships these units for use in high-end monitors and other products. Through this partnership, JOLED will work together with Burning Core to develop OLED displays optimal for esports use, through activities including having team members test monitors and exchange of opinions on visual expression that draws out the appeal of the games.

Representative Director Yamamoto of Burning Core Co., Ltd. says of this agreement, “Burning Core’s vision is to grow “League of Legends” and esports in Japan, and we are looking forward to working on development of OLED displays that will have the potential to draw out the appeal of the game even more.”

JOLED Senior Corporate Officer & Chief Technology Officer Hiroyoshi Takezawa says, “We are greatly honored to have the opportunity to join with Burning Core in helping to advance esports through OLED development.”

JOLED will continue striving toward becoming the leading company in the OLED display field to realize its mission of developing the most advanced devices to achieve a world full of excitement and emotion.

Burning Core’s vision is to grow “League of Legends” and esports in Japan. To stimulate the professional gaming scene as a team that can succeed not only in Japan but around the world, team members live together in a Gaming House where they train every day. Burning Core aims to be a team of players who can be respected role models for the public, not only through their game skills but through their teamwork and in their everyday lives as well.
burning-core.com
burning-core.com